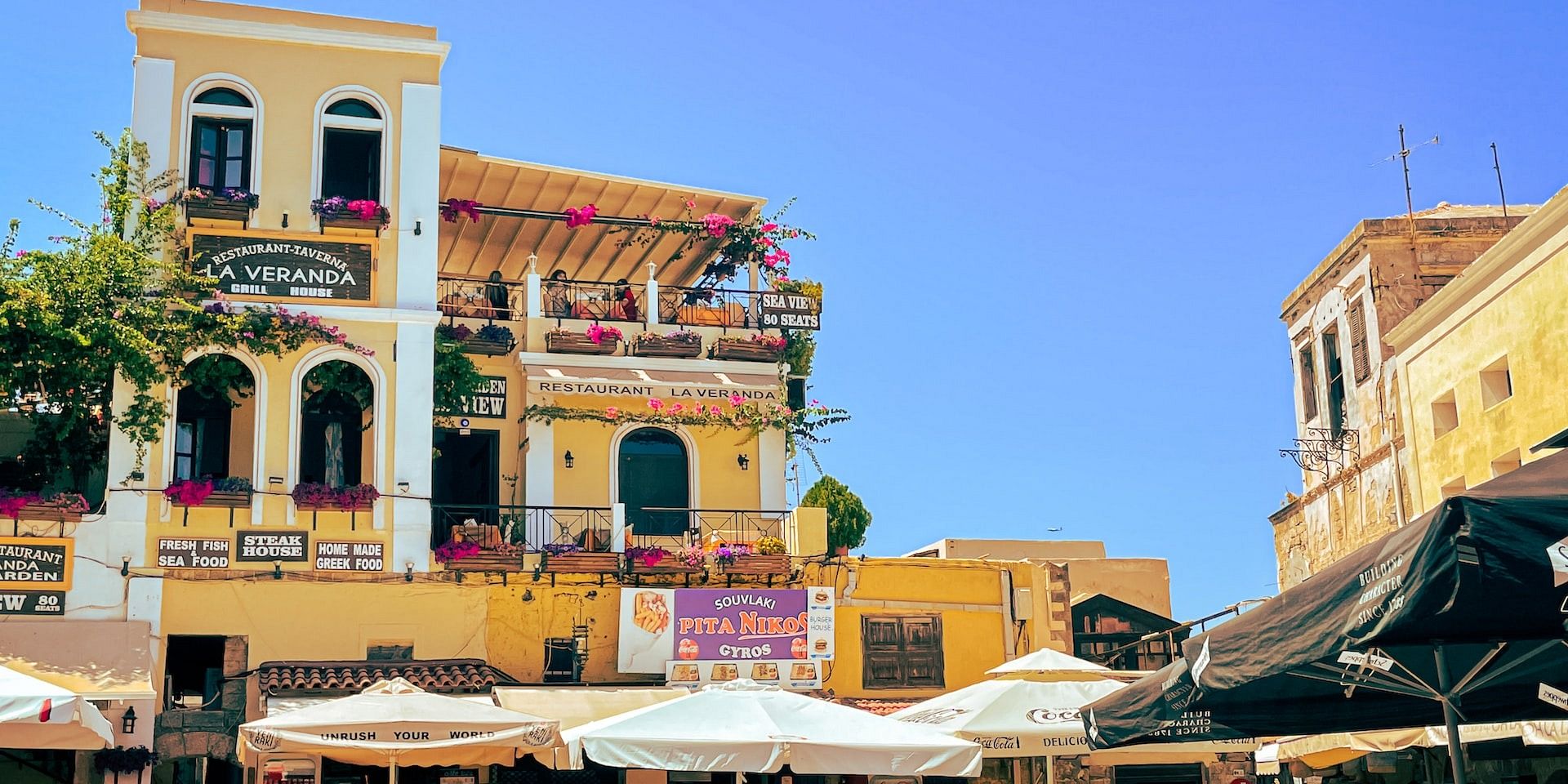 Symi Island stands out by its architecture among the tens of Greek islands. Its multicolored houses create a unique environment for memorable holidays. Once you visit this Paradise location washed by the Aegean Sea, you will hardly ever forget its particular charm.

However, Symi has plenty of other attractions to offer you apart from traditional houses.

The familiarization with the island always starts with a walk through its capital – the town of Symi. On the slopes of the area, you can see the foremost attraction of the settlement – the Kastro castle. It was built in the XIV century on the ruins of the ancient acropolis and the Byzantine castle.

The central entrance of the Kastro is adorned with the emblem of the Knights of Agios Ioannis. In close vicinity to the building, one can also observe the remnants of the old citadel and early constructions. This place provides spectacular views of the port and the sea.

On the highest point of Symi, you can find another beautiful landmark – the stone church of Kyra Panagia. Thanks to its convenient location, travelers have an opportunity to observe the scenes of Yialos (the lower district of the town) and Chorio (the upper area of the city).

How to reach: you can reach the Kastro on foot. The road to the top of the hill is pretty steep. That is why you should take a trip in the very early hours in the morning or evening hours when the heat breaks.

Additional information: the taverns, shops, and apartments are set within walking distance from the castle.

Pay Attention: the two districts of Symi town – Yialos and Chorio – are linked by means of the old picturesque street Kali Strata. Get ready to overcome 500 stone steps with steep turns. However, this small adventure is worth taking! It provides an excellent opportunity to admire original houses without modern refurbishment as well as take a glance onto Symi from above.

The island’s capital has preserved a big number of traditional mansions. Many years ago, they belonged to local prosperous families. Many of them were converted into contemporary hotels in the course of time.

However, one of these mansions had the honor to become an archaeological and folklore museum after the reconstruction. Its collection comprises the artifacts from many archaeological sites: it can boast of hosting the Roman and Hellenistic items, sculptures, ceramic, and weapon. The museum houses a rich collection of artifacts of the Byzantine culture: icons, manuscripts, and coins.

The folklore collection is one of the most impressive ones in the museum. All visitors can see traditional costumes of Symi, musical instruments, handicraft, household items and photographs, which depict the life of residents a few decades ago.

How to reach: the museum is situated in Ano Symi, just 500 meters from the Kastro.

The museum devoted to the seamanship of Symi was presented to the public in 1983. Later, in 1990, it “moved” in the building of the picturesque neoclassical mansion. You can see the ancient maps, models of the ships, and a diverse collection of diving suits there.

A separate room in the building of Nautical Museum is devoted to sponge fishing that was considered to be the most significant activity of the island’s citizens. Its diverse collection views the carved wooden water craft and pictures, regarding the sea and shipping.

How to reach: the museum is situated in Yialos. It is set within walking distance from the center of the capital.

Additional information: the ticket price – €2; hours of work: it is open daily.

The Archangel Michael Monastery of Roukouniotis belongs to a list of the most energetically and spiritually strong places found on Symi. The building was established on the ruins of the ancient sanctuary in the V century. It is considered to be the oldest monastery on the island.

The modern monastery image was assumed in the XV century after the Knights of Saint John constructed a small fortress there. Up to the XVII century, it turned into a residence of the monastic commune. It was an excellent remote location, which provided perfect defense from the pirate invasions.

At present, the two temples of the building house valuable paintings of the XV century. The most famous artifact found in the building is the icon of the Archangel Michael. Another local attraction is the cypress tree, which is 100 years old.

How to reach: the monastery stands 5 kilometers from the capital of Symi. The best way to reach it is to hire a car.

Additional information: hours of work: the monastery is open daily from early morning until late evening.

The Monastery of Panormitis takes a prominent place among numerous attractions of Symi Island. The firm date of its creation is still unidentified. However, according to the old manuscripts, it had already existed in the XV century.

The interior of this religious residence is adorned with paintings of the Byzantine period. One of them depicts the Archangel Michael. This place is the home for many wooden carved icons.

On the territory of the monastery, you can see two museums, which exhibit a collection of silver icons, church jars, objects of local culture, Byzantine manuscripts (many of them date back from the XVI century), as well as a rich collection of pictures, which depict Panormitis and its landscapes. The miraculous icon of the Archangel Michael is considered to be the most important holy thing of the monastery. There is abundant evidence of its healing properties: many pilgrims got cured from various ailments after a visit to Panormitis.

How to reach: the Monastery of Panormitis nestles in the same-called settlement; just 19 kilometers from the island’s capital, the town of Symi. You can easily get there by a rented car. Another way to reach this location is by sea from Rhodes. On the route to the capital city, the ferries always make a stop at the monastery.

Additional information: the admission fee to the monastery’s museums is €2. In close vicinity to the village of Panormitis, you can see a picturesque promenade which invites to taste a cup of fragrant coffee in one of the taverns, overlooking the sea, or take a walk through the settlement.

There are several villages that are worth visiting during holidays on Symi Island: