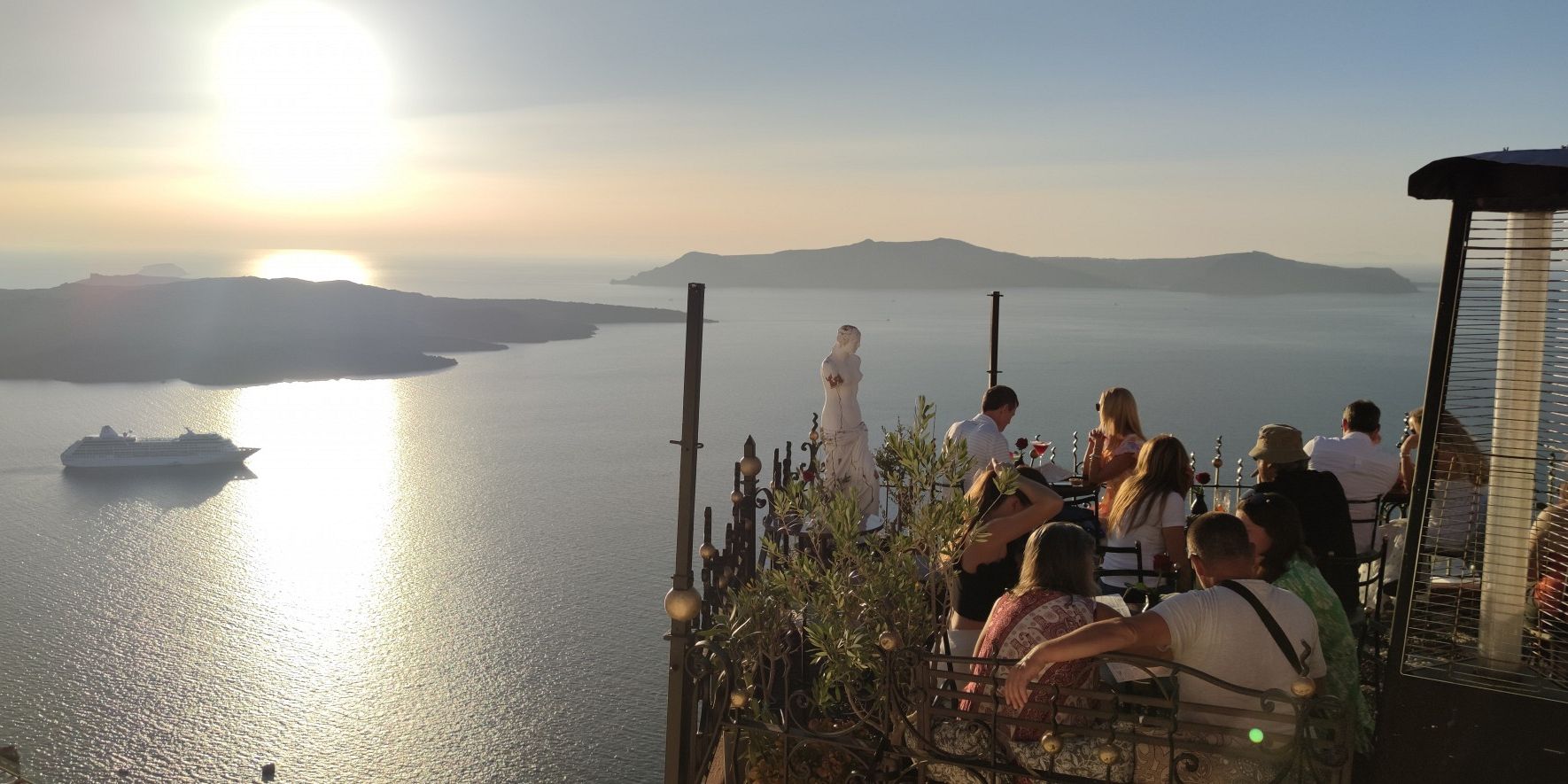 What to see in Santorini

The iconic island of Santorini is a place for which every second tourist comes to Greece. Spend a week here or just 1-2 days - the time is not so important. It is much more important to see something more in Santorini than its blue and white houses. What to visit in Santorini? We get acquainted with the main attractions of the dream island.

What to see in Fira

In Santorini, Fira is the main town and capital of the island, perched on the edge of a 260-meter cliff with panoramic views of the caldera. The Santorini caldera is one of the natural wonders of the world. It was formed over 3,500 years ago by a volcanic eruption that forever changed the topography of the Mediterranean coast. You can enjoy views of the caldera from cozy bars and restaurants that are open especially for those who want to watch the sunsets or the sea.

The Archaeological Museum of Santorini is located in Fira, the exhibits of which tell about the long history of the island. In its halls, collections of inscriptions and sculptures from different periods are exhibited, from the time of the archaic to the Roman era. The museum owns a large collection of ceramic vases, vessels and marble figurines.
Opening hours: from 8:00 to 15:00

The Museum of Prehistoric Fira contains finds made during the excavations of the ancient city of Akrotiri. Its rich collection includes Cycladic marble figurines, vessels, metal products, frescoes, furniture, ancient weapons. A separate hall is dedicated to the heyday of the settlement. Among the main exhibits of the museum is a figurine of a golden ibex. This is the only gold item that archaeologists have been able to find.
Opening hours: from 8:30 to 18:00

The Folklore Museum is another collection worthy of attention. It is housed in a 19th century house and immerses in the traditions of Santorini, its unique culture and characteristics. Manuscripts, household items, tools, costumes, crafts - all this will be seen by visitors.
Opening hours: from 10:00 to 17:00

The Megaro Gizi Cultural Center operates in Fira. It is located in the former mansion of a Venetian family, which dates back to the 17th century. The exposition of the cultural center is impressive: there is a collection of paintings, engravings, historical documents and manuscripts, photographs. In summer, Megaro Gizi invites you to attend concerts, temporary exhibitions, theater performances. The cultural center is popular not only among the guests of Santorini, but also among the locals.
Opening hours: from 10:30 to 13:30 and from 17:00 to 20:00

Among the religious monuments of Fira (and there are many of them in the city), several stand out:

The ruins of the ancient city of Fira are located in an amazingly beautiful place. From all sides they are surrounded by rocks, which serve as scenery for the archaeological zone. Walking along the hiking trails of ancient Fira, you can notice traces of the presence of different civilizations. Monuments of the Dorian, Roman, Venetian, Byzantine eras have been preserved here. You can navigate by signs, or you can use the services of a guide.

Many mysteries are connected with the history of the ancient city of Akrotiri. Destroyed in the 17th century BC as a result of an earthquake, it was rebuilt, but then finally destroyed after a volcanic eruption. No one knows how the local population found out about the approaching tragedy and left Akrotiri long before the incident. After all, during the excavations, the remains of neither a person nor an animal were found here.

But it is reliably known: Akrotiri flourished due to trade, was a rich and prosperous city. Its buildings were densely built, the streets were cobbled, and the walls of the buildings were decorated with frescoes depicting local residents - well dressed and elegant. Covered in volcanic ash, Akrotiri only revealed its legacy to us a few decades ago. It is perfectly preserved, so when visiting the archaeological site, vivid impressions from meeting with the past of Santorini await. In Akrotiri, you can look at the arrangement of houses and streets, admire the frescoes, large clay vessels and find out what the shops of that time looked like.

The fortress of Kasteli is a monument of Venetian times and one of the five medieval fortresses that existed on Santorini. Built in the 15th century, it stands on the highest point of the island. Once Castelli impressed with its grandeur, today its ruins remind of the scale of the building. On the territory of the fortress, the churches of the Assumption of the 10th century, Agia Theodosius and the Church of the Virgin of the 17th century have been preserved. Castelli attracts not only architecture. From its height offers a breathtaking view of Santorini.

In Akrotiri, in addition to the archaeological excavations of the ancient city, there is another interesting object: the Venetian castle. He remained impregnable for a long time, but eventually fell, submitting to the Turkish invaders. There is a medieval tower on the territory of the castle. It housed a collection of tools and a traditional workshop. Akrotiri Castle attracts photography enthusiasts. From above, views of most of the island open up, and the ruins serve as scenery for shooting.

The monastery of the prophet Elijah was built at an altitude of more than 500 m above sea level. This is one of the oldest monasteries in Santorini: the first mention of it dates back to 1712. Around are rocks and vineyards. Such landscapes create ideal conditions for trekking. For a long time the monastery of the prophet Elijah played an important cultural role. It operated a school of Greek language and literature, which helped to preserve folk traditions in the years when the whole country was occupied by the Turks.

Today, the monastery of the prophet Elijah houses a valuable collection of rare church items, Byzantine icons and manuscripts. The monks are engaged in winemaking, shoe making and candle making, all of which can be bought as a memento of a visit to the monastery. The location of the monastery offers breathtaking views of the sea.

What else to see in Santorini