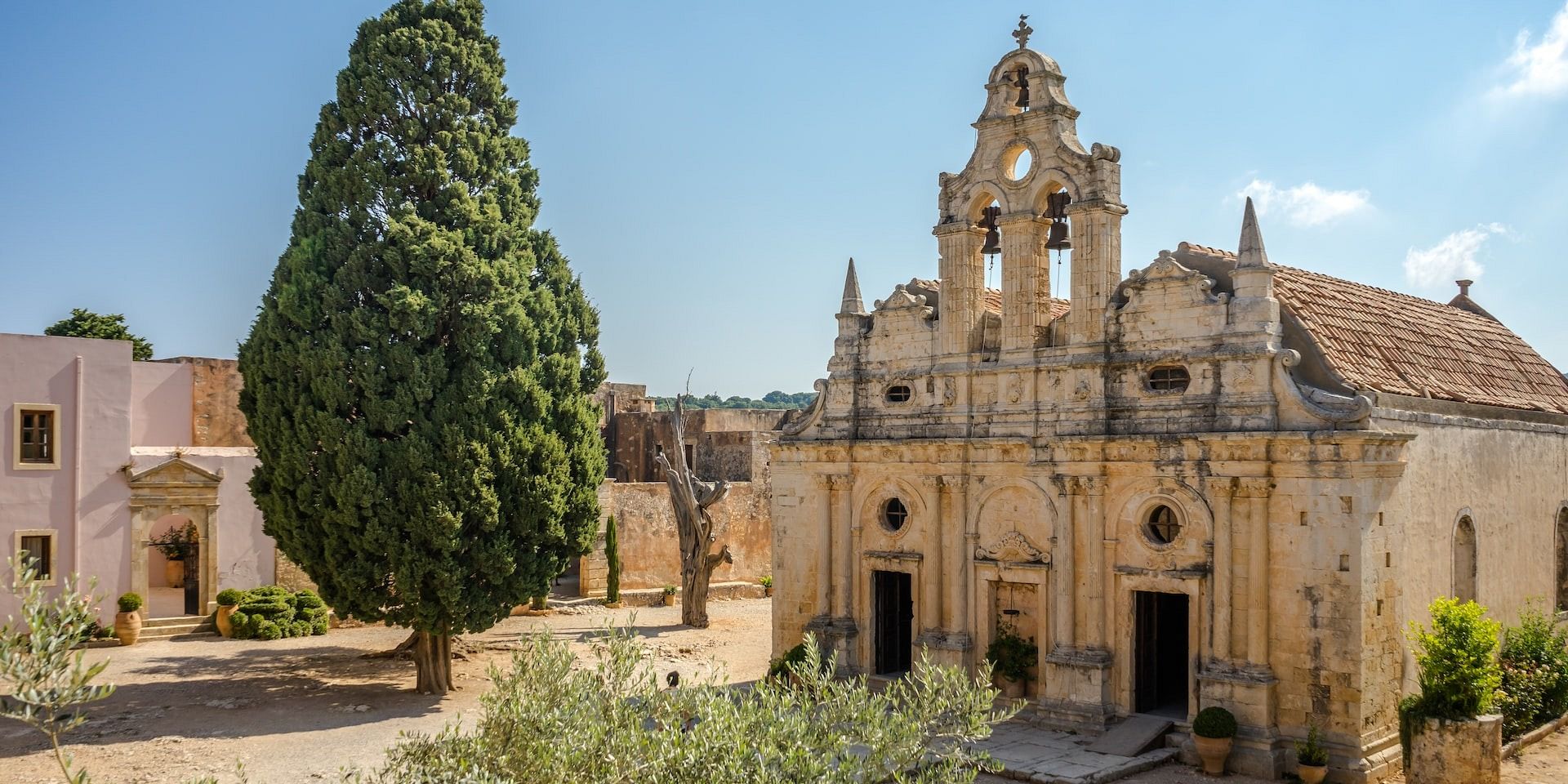 8 Must visit religious sites in Crete

Christianity came to the shores of Crete in the 1st century AD. This prominent occasion is related Titus, the student of the Apostle Paul. At present, the island is among Europe’s foremost Orthodox centers. The pilgrims and holidaymakers interested in religion regularly come to visit the holy sites in Crete.

A women’s convent of Panagia Paliani is regarded as the oldest religious constructions on the island of Crete. One still does not know the official date of its creation. However, the first mention of the religious building in the official documents proves that it had already existed in VII century.

The story of the convent is connected with the Myrtle tree and the miracle-working religious painting. The lore says, people found the icon in a trunk of a tree. The attempts of people to move the icon out of the tree were failed: each day they found it at the same place again. The tree kept on growing and enclosed the icon completely.

At present, the tree of Myrtle is worshipped as miraculous. Its bark, leaves, and branches are given to the pilgrims who come here for healing from different diseases. The worshippers can also bow to the exact copy of the legendary icon which is set in the main temple of Panagia Paliani.

In the past, the monastery was one of the most prosperous in Crete. It suffered a lot from the Turkish attacks. However, each time it kept on rising from the ashes. The modern museum of Panagia Paliani still preserves a great number of icons and church artifacts.

Ticket price and hours of work: the entry is free of charge. The monastery operates daily from dawn to dusk.

Infrastructure facilities nearby: you can find the nearest taverns, gas stations and hotels just 2 kilometers from the convent.

Among the must-see attractions you should visit in Crete, Arkadi Monastery is of the foremost priority. It is the major religious building in the Rethymno regional unit. It features Baroque-style architecture.

Arkadi Monastery played an important role in the historical events of the island and was the symbol of courage, patriotism, and the struggle for freedom from the Turkish invaders. The landmark is a complex of different constructions: the major temple, cells, storerooms, pantries, and the museum with the religious artifacts. The monastery’s museum exhibits valuable icons and weapons that were used by the fighters for the independence of Crete.

Location: you can find this spot just 20 kilometers from Rethymno.

Infrastructure facilities nearby: the nearest cafeteria is accessible in 450 meters from the monastery. The village of Amnatos – set in 3.5 kilometers – also provides venues for dining.

The residents of Crete have great respect to Saint Titus and consider him to be their patron saint. It was he who approved the orthodox belief and became the first bishop on Crete. The church devoted to Saint Titus was established in the X century. However, with the course of time, the Venetians turned the building into a Catholic temple. Later, the Turks transformed the church into a mosque.

It was the general Morosini who took away the most of the religious artifacts from the church to Venice when Iraklion was conquered by the Turks. It seemed all those items were irretrievably lost. However, in fact, this action saved a lot of holy objects, among which is the reliquary with the head of Saint Titus. It was returned to the church in the mid-50s.

All power of sacred is worshipped by the pilgrims as miraculous. There are also many incomparable religious paintings in the church.

Ticket price and hours of work: the entry is free of charge. The building is open from 8:00 by sunset.

Location: the square of St. Titus in the center of Heraklion, near the Venetian Lodge and the central park.

Infrastructure facilities: in close vicinity to the landmark, you can find cafes, shops, bank branches as well as a lot of facilities for entertainment.

If you are among those travelers who spend plenty of time thinking about what religious temples to visit in the northeast of Crete, you should know that the most prominent attraction of this area is Toplou Monastery. It is a marvelous construction with extraordinary architecture. At first glance, it reminds you of a fortress with high walls.

In the past, the building served for the purpose of defense from the pirate raids. Toplou Monastery is the treasury full of various antiquities. Among them you can observe:

The icon “Great Art Thou, O Lord, and Wonderful Are Thy Works” by Ioannis Kornaros is considered the most valuable artifact of Toplou Monastery. People worship it as miraculous.

Location: you can find the building just 15 kilometers from Sitia.

Infrastructure facilities nearby: a few steps away from the monastery, you can see a tavern and a winery.

In the far past, the building found itself in the center of a struggle for the liberation of the island. As a result, it had suffered a lot from the devastation. The Lower Preveli is the oldest part of the complex. It comprises a lot of premises, set within different levels.

The Rear Preveli is placed above the Lower part, at the distance of 3 kilometers. Here you can visit the temple and see a carved iconostasis. This religious residence accumulates various relics: the ancient books, icons, and very old manuscripts.

The pilgrims come to Preveli to worship to the wonder-working Holy Cross. People believe it to preserve the fragments of the True Cross and heal eye diseases.

Infrastructure facilities nearby: a cafeteria, a parking lot and Preveli Beach.

The Monastery of Chrisoskalitissa nestles at a 35-meter cliff, providing scenic views of the sea. The building bears the name of the Golden Step described in a legend. According to the lore, only the true believer can see it.

The first written comments on the existence of the monastery described that the building had been already constructed by the middle of the XVII century. In the course of time, it had undergone devastation and reviving. At present, a lot of people visit Chrisoskalitissa Monastery to bow to the major sanctuary – the holy icon of the Virgin Mary.

Infrastructure facilities nearby: there are only 700 meters between the Chrisoskalitissa and the nearby hotels.

In spite of its relatively young age, the Monastery Panagia Kaliviani has already become a significant holy place for the pilgrims coming to Crete. It was constructed on the place of the former chapel that collapsed in the course of time. Under its debris, people found the icon of the Annunciation.

It was the beginning of the establishment of the monastery. It was presented to the public in the middle of the XX century. Panagia Kaliviani Monastery exhibits the relics of the Metropolitan Nile, the new martyrs of Crete, and Saint Nectarios of Aegina.

On the territory of the monastery, you can also find the museum with church relics.

Location: it is situated just 600 meters from Phestos Palace and 57 kilometers from Heraklion.

Infrastructure facilities nearby: within a few-minute walk, you can see hotels, taverns, gas stations, and lovesome mountainous villages.

The Monastery of Agia Triada is the most significant religious construction in Chania regional unit.

Many people think that its beauty can even compete with Arkadi Monastery. However, the Monastery of Agia Triada attracts thousands of pilgrims not only with its architecture. The building houses a diverse collection of icons, including the items which date back from the XVI century.

The icon of Saint John the Theologian is considered the major relic of the monastery. It was painted in 1500. At the times, when one brings the holy relics on Crete, the Monastery of Agia Triada is among the churches hosting these valuable pieces.

Agia Triada Monastery Crete opening hours and ticket price: the entry costs €3; the holy place id open to visitors from 8:00 before the sunset in the summer and till 16:00 in the winter.

Infrastructure facilities nearby: you can find the nearest hotels and taverns in the neighboring village of Chordaki; the airport of Chania is accessible in the 3-kilometer distance.