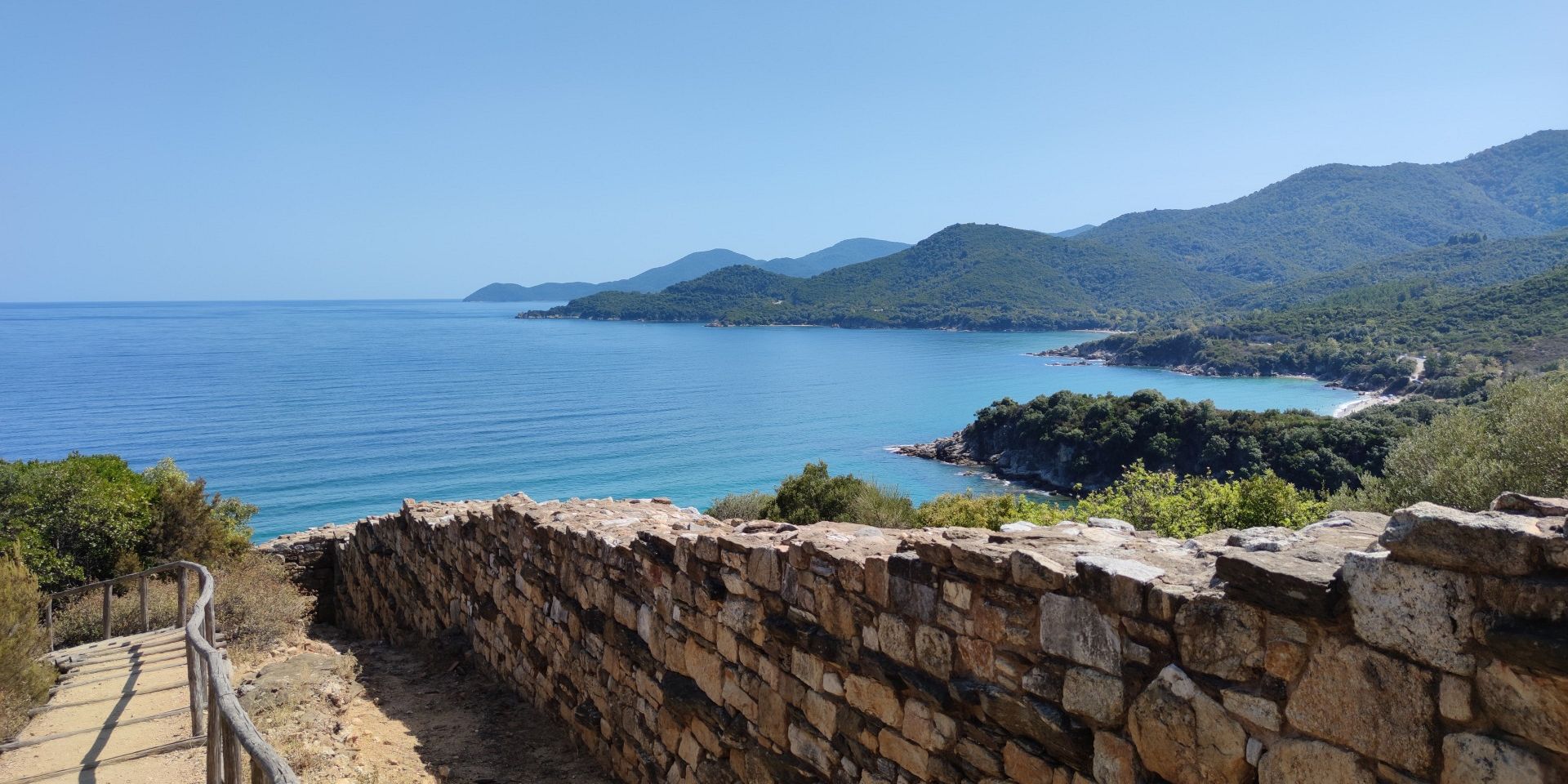 What to see in Halkidiki by car

The peninsula of Halkidiki is a space for tourists who choose a car as a means of transportation. Its landscapes, historical heritage, coastal towns and beaches require detailed study. What to see in Halkidiki by car and where can I go?

The first "finger" of Halkidiki, Kassandra, is rich in places worth stopping by. One of the first is in Nea Potidea. This city was built on the site of an area known since ancient times. Nea Potidea is famous for the famous Potidea Canal. It not only separates Kassandra from the mainland, but is also considered one of the most photographed attractions in Halkidiki. In addition to the canal in Potidea, there are many more interesting things: the ruins of the wall of Justinian, several historical temples, a monument to the heroes of 1821.

Leaving Potidea, you need to move towards Nea Fokea. It attracts with a medieval tower located on the coast. The Byzantine building is perfectly preserved: in the summer, a festival is held on the hill next to the tower. In addition to it, it is worth visiting the cave of the Apostle Paul with a holy spring.

Afytos is located 6 km from Nea Fokea. This city is considered the most beautiful in Kassandra: its popularity was brought to it by ancient stone houses and a cozy central square with a temple and an ethnographic museum. Afytos is also called the "balcony of Kassandra". There is a breathtaking view of the coast from its observation deck. If you wish, you can drive by car to the long beach of the village.

Near Afytos you can visit Kalithea. This city is known not only for its developed tourist infrastructure, but also for its beautiful beach. Near the coast lie the ruins of the temple of Zeus Ammon.

By car, it is convenient to get to the hot springs of Agia Paraskevi, which are located at the very end of the finger. This is a modern spa complex with outdoor and indoor pools, a sauna and a stunning viewpoint for relaxation.

Having studied Kassandra, you can go to the peninsula of Sithonia. He keeps no less treasures than his neighbor. Between Sithonia and Kassandra lie the ruins of ancient Olynthos. On the site of the once influential city, today there is an archaeological park in which you can see the remains of a unique floor mosaic and traces of a Neolithic settlement. Olynthos has a museum with a rich collection of artifacts.

Fans of a lively resort atmosphere should definitely make a stop in the city of Neos Marmaras. All categories of tourists love it for its wide opportunities for leisure activities. During the day in Neos Marmaras, you can relax on the nearby beaches and do water sports, and spend the evening in traditional taverns and clubs, of which there are many.

Another place in Sithonia to visit by car is Vourvourou. This area is famous for its heavenly bays. Vourvourou is a place with an azure sea, clean beaches, an abundance of greenery and a measured atmosphere. Particularly stands out the Karidi bay with exotic landscapes.

The bay of Porto Koufo is famous for its majestic beauty. It is a natural harbor surrounded by high cliffs, where the sea is always calm. In addition to nature, Porto Koufo is also a historical site from the 2nd World War: German submarines hid in deep waters. Now it is a place with peaceful silence, many fishing boats and taverns with the freshest fish.

There are several places on Sithonia where history buffs should go by car:

Most of the Athos peninsula is occupied by a monastic republic. But you can get to its border on your own by car and visit the cities of Athos. Firstly, you will meet Ierissos with white sandy beaches and historical monuments. Among them are the ruins of an Ancient Akanthos, a Byzantine fortress and a temple.

The road will then lead to the charming coastal town of Nea Roda. In its surroundings there are picturesque quiet beaches where you can feel the privacy even in August during the peak season. And the most inquisitive travellers will find the Athos Border (be careful, the road in this area is not good).

The final destination will be Ouranoupolis with a 14th century Byzantine tower. Here you can leave the car and transfer to the ship to Athos. Men have a chance to go ashore, and women will have to be content with the view from the sea. Check the schedule in advance.

Outside the three "fingers" of Halkidiki it is worth visiting the sights of the mainland of the peninsula. Among them is Stagira. This is the birthplace of Aristotle with a park where exhibits illustrate interesting laws of physics. You shouldn't expect much from the park, it's more of an option for a little entertainment for children. However, nearby, in Ancient Stagira, you can spend 2-3 hours, the place is very impressive: the preserved fortress walls and parts of houses are on a promontory with fantastic views.

Nearby there are beaches of stunning beauty, and the scenery in general is breathtaking. Also visit the colorful village of Olympiad with a bright modern graphic - a portrait of Aristotle. By the way, in this region actively grow mussels, so you can see sellers on the road. Feel free to take them - the goods are the freshest! The main thing is to get them to your place of residence quickly to cook them.

If you drive from Stagira back in the direction of Ierissos, you will enjoy the beautiful road with the views of the sea and the forest. On the way you will meet the mysterious village of Stratoni, which looks like suddenly abandoned, because there are almost no people in the streets and the beaches are empty. The secret is that there is a gold mining company, so this village has not developed as a resort, although it is quite picturesque.

Not far from Stratoni there is a very important monastery, or more precisely, the branch of the Chilandary monastery of Athos. For those who want to touch the Holy Mountain, this is a unique opportunity, of which few are aware.

It is worth seeing Polygyros - the capital of Halkidiki and just a picturesque city located at an altitude of more than 500 m. Polygyros has a long history, so there is something to see. For example, the Archaeological Museum with exhibits found at the excavation site at different points in Halkidiki, temples, a folklore museum and the chapel of Elijah the Prophet. Next to it there is an observation deck with breathtaking views. The city has monuments to Aristotle and famous participants in the uprising against the Turkish yoke. The colorful houses of Polygyros, which combine modern architecture with traditional Macedonian and neoclassical architecture, deserve special attention.

Arnea is also a popular town among lovers of mountain architecture. It is characterized by brightly colored houses. Here you can take a slow walk, eat local meats in a tavern and buy honey, a traditional product of the region.